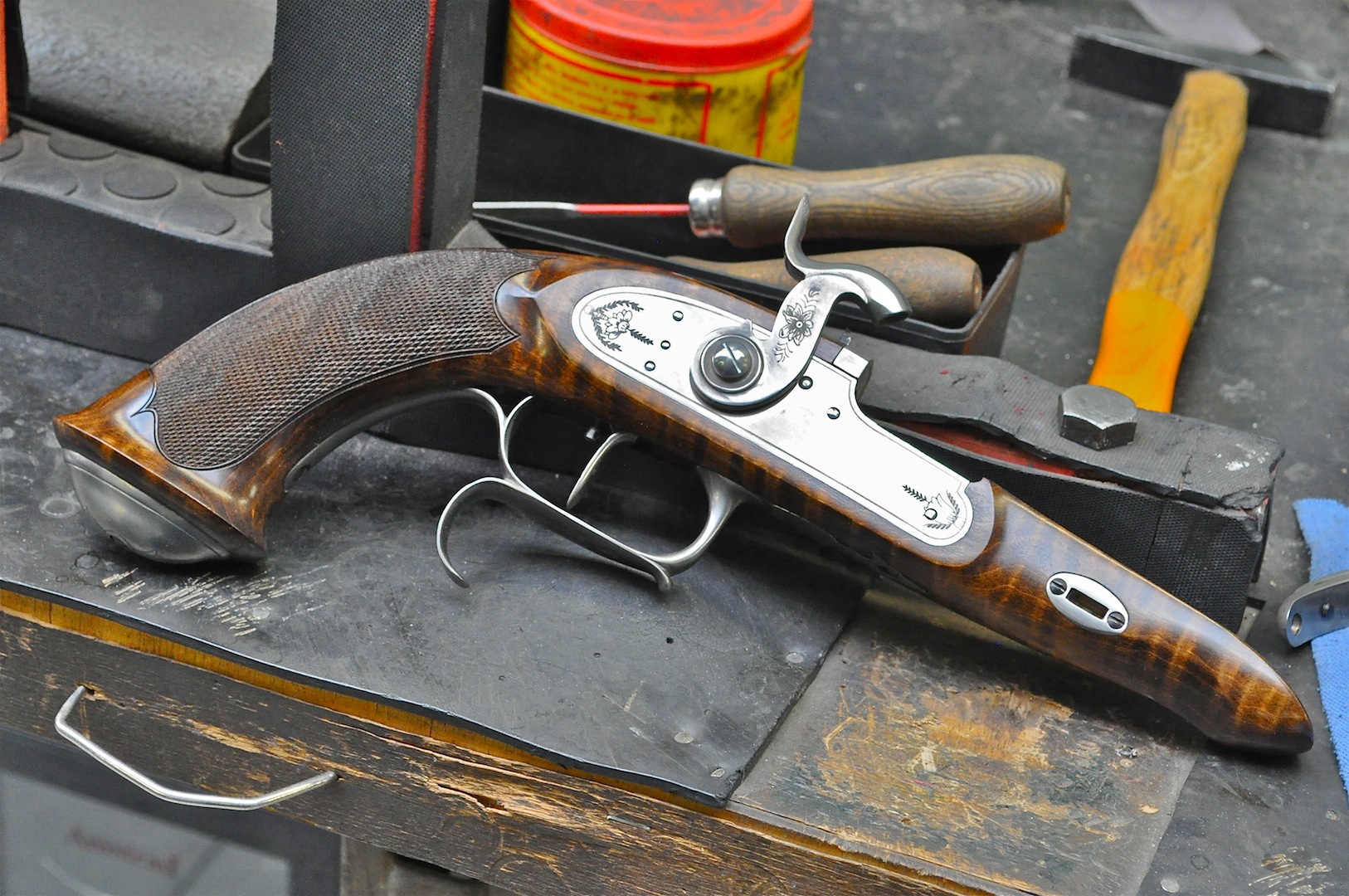 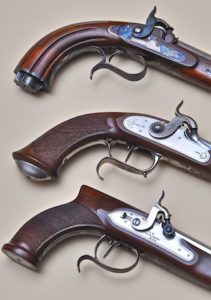 Accuracy of design, top quality materials and impeccable workmanship are key features for fire arms intended for competition shooting and the Davide Pedersoli brand is a guarantee for those not prepared to comprise when it comes to excelling in competitions.

In order to get the best results possible at the range, the italian company, Davide Pedersoli offers three special products within a very large range of commercial pistols already famous in their own time for exceptional accuracy.

More specifically, we are refering to the Le Page, Mortimer and Kuchenreuter pistols, which together with the multiple award winning Mang in Graz, represent the spearhead of replicas made for target shooting at the highest levels and therefore, requires a consistency of performance of the highest order.

These fire arms which we will present; taken individually, have features which them unique, yet at the same time they possess common traits which allows us to state quite firmly and confidently that the demanding shooter can choose any pistol in this particular range without compromising their performance.

These three pistols are most markedly different in terms of ergonomics and balance. The competetion shooter, therefore, need only hold each pistol and choose the model that best suits their own bio-physical characteristics and sensitivity.

THE REPLICAS OF TODAY

The pistols at first glance look antique, however, these replicas are modern firearms in all but appearance, especially in the area of safety which is of paramount importance to the shooter.

Modern design techniques, building of prototypes and industrial production offer the manufacturer the chance to firstly identify the best way to attain their goal and secondly, to have a very high quality production process in order to avoid large differences between one pistol and the next, typical of soley artisan produced pistols.

The original Le Page, Mortimer and Kuchenreuter were, despite the absence of highly sophisticated metallurgical production techniques, mechanical masterpieces. It should, however, be noted that they were produced in small numbers and the chance to obain one today in excellent condition would be an extremely arduous project. Furthermore, it would also be very expensive one.

The advantages of a replica vis a vis an original, in practical terms can be summed up in four points.
The design of the replica is identical to the original, the safety is vastly superior, the purchasing cost is relatively low and the assistance after purchase is guaranteed by an excellent logistical structure up to the task. 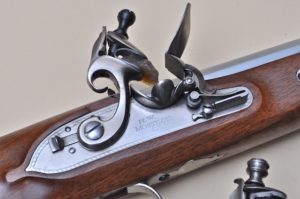 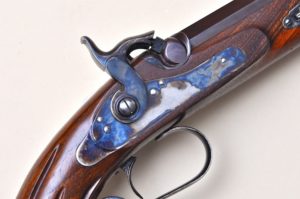 Nowadays, many fire arms are designed so as to keep expenses as low as possible in the production stage, the prime material required and in terms of manufacturing time. The Pedersoli company is adifferent matter and one can quite safely describe their firearms as very refined in the traditional sense of the word. This is particularly true when they very carefully select the best prime material.

Generally, the metal parts are formed from machining forged ingots and then heat treated to improve their overall mechanical characteristics.

Finally, the wood, which is normally the precious european walnut, this too is cut from tree trunks in such a way that the grain is used to both boost the beauty of the end product as well as to reduce the deformation produced by heat, humidity and the stress when firing the pistol.

The “Deluxe” versions of each model have an even more intricate design trasforming the end product almost into a work of art; aesthetically pleasing to the eye but one which remains fully functional.

Pedersoli’s replicas are very closely linked to traditional work techniques, when visiting their production facility in Gardone Val Trompia, one almost feels as though time has remained still during the golden age of fire arms manufacturing when men rather than machines that produced them, true mechanical masterpieces.

Those that still work in a traditional artisan manner are called the “bench operators” who do almost everything by hand without the assistance of machines. One can see the precision of their workmanship when looking at the each of the firearms described: excellent workmanship assembled excellently and excellent finishing and at the same time totally functional.

The artisan activity is not present during the entire process as a good level of production volume means that the use of machines at the technological vanguard are indispensible as well as maintaining an overall consistant high standard of quality.

Davide Pedersoli’s winning formula is in a certain sense the ability to mold the traditional artisan and modern production techiniques into a superb commercially viable end product. 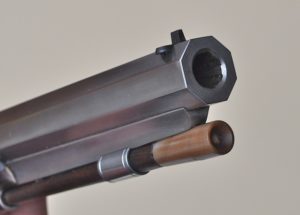 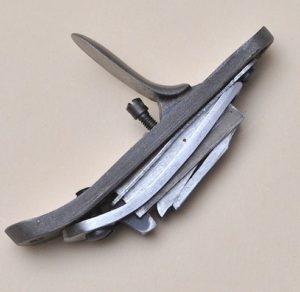 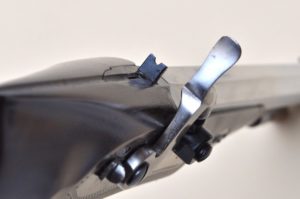 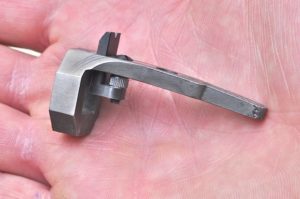 The barrels of the Le Page, Mortimer and Kuchenreuter represent the best of the Pedersoli production and deserve a more in depth look.

The semi worked cylindrical rods of type PR80 steel, whose chemical composition is a base of iron with the addition of manganese, sulfur and lead to ease the removal of chips. The high carbon content means that the material can be better heat treated to improve stiffness and strength.

The work cycle on the barrel has been studied scientifically in order, on the one hand, facilitate the drilling, external lathing and rifling by broaching and lapped and on the other hand ensure a high level of mechanical strength of the end product.

A perfect barrel must, however, not only be perfectly built, it must also be perfectly coupled to other parts of the firearm such as the stock and ensure that it sits prefectly once assembled.

The firing mechanisms, be they flint lock or percussion cap are set off by a set trigger system which allows the shooter to choose the trigger pull of choice.

When shooting with the set trigger disengaged, one must pull the trigger fully back, thereby compressing a spring which will then free the release.

When using the set trigger, one need only pull the trigger back to the desired trigger pull pressure and length position so that the shooter can decide on the optimal position and fire in a more relaxed manner.

The single set trigger mechanism can be adjusted by the shooter, however, quoting from the user manual, “in order to avoid an accidental discharge, one must act with extreme caution and after every adjustment (it would be good to check every so often in any case) follow the manual’s instructions and dry fire the weapon in safety to make sure that everything is set as one desired.

The adjustable iron sights are a usual aid for the demanding shooter and can be moved both laterally and in elevation by using a normal screwdriver.

Every full turn of the screw will move the sight by 0.5mm (0.2 inches), this value is a very useful point of reference when setting up the fire arm to shoot a tight grouping, further exalting a proven ammunition with well regulated sights.

The mechanical solutions described thus far are common to all three pistols, making them practically perfect for target shooting. The success enjoyed in competition speaks volumes as does another statistic that shows that the use of Davide Pedersoli firearms is very widespread and that they enjoy a high percentage of the victories in competitions where replicas are used. 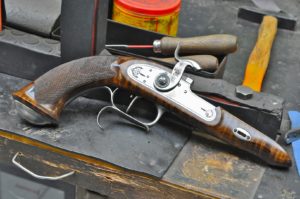 These firearms are available either with a flint lock or a percussion cap apart from the Kuchenreuter which is only produced as a flintlock. For pratical reasons one would suggest using the percussion cap version, however, once well acquainted with the flint lock version, the latter may give more reason for pride with the same end result.

Theoretically, apart from a slight delay in ignition from the flint lock version, the two systems would appear to be identical, however, if the this part of the pistol is not perfectly fitted the flint lock will have more of a problem functioning properly.

The use of the percussion cap reduces the variables in play and could be more advantageous for the shooter – one aspect could be, reduced stress- although this statement does not hold true for everyone as there are a good number of excellent shooters using the flintlock version.

Reloading ammunition is fascinating, however, from a competition point of view, an impeccable assembley of the individual components is fundamental. There are plenty of commercially available products for those wanting to make their own rounds and assemble the ammunition, however, who would know better than the manufacturer who designed and built these firearms what the best options are?

Davide Pedersoli’s answer to this question for muzzle loading fans is to produce casts for specific balls for each type of fire arm in their catalogue.

As far as gun powder is concerned, Davide pedersoli’s advice is slightly different, they suggest using any of the commercially available products of known reliability and quality such as some powders made in the US, Switzerland as well as the german Po-wex and the french Vectan. The main difference being the speed of combustion of the powder, however, generally speaking most of the commercially available powders are suited to the Gardone based company’s product range.

A large and complete range of accessories is available to satisfy the wants and needs of muzzle and breech loading firearms fans the world over.

THE MUSEUM OF WEAPONS AND THE TRADITION OF GUNSMITHING IN GARDONE V.T. → 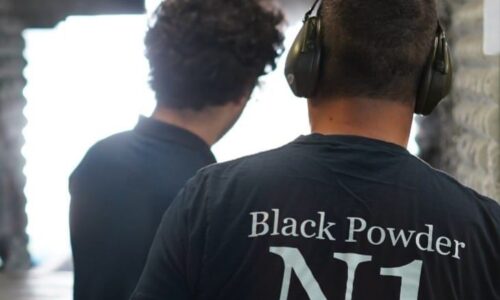 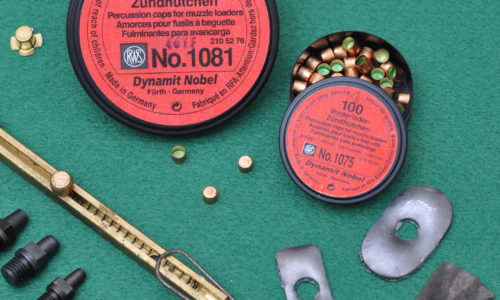 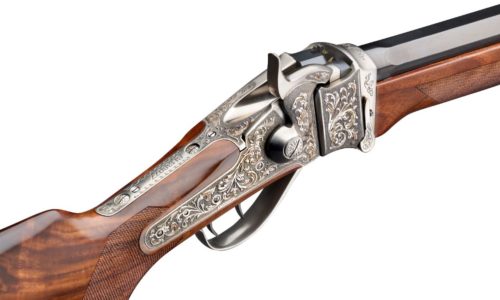 THE STRENGTH OF VERSATILITY